Month-over-month, XRP saw a 1,151% surge in trading activity in November, the biggest among all cryptocurrencies. This comes as XRP price rallied to $0.92 on Coinbase at its monthly peak and closing the month with a 283% gain at around $0.61.

Bitcoin (BTC) was nearing $19,000 for the first time since December 2017 when large market cap altcoins like XRP started to surge in November. 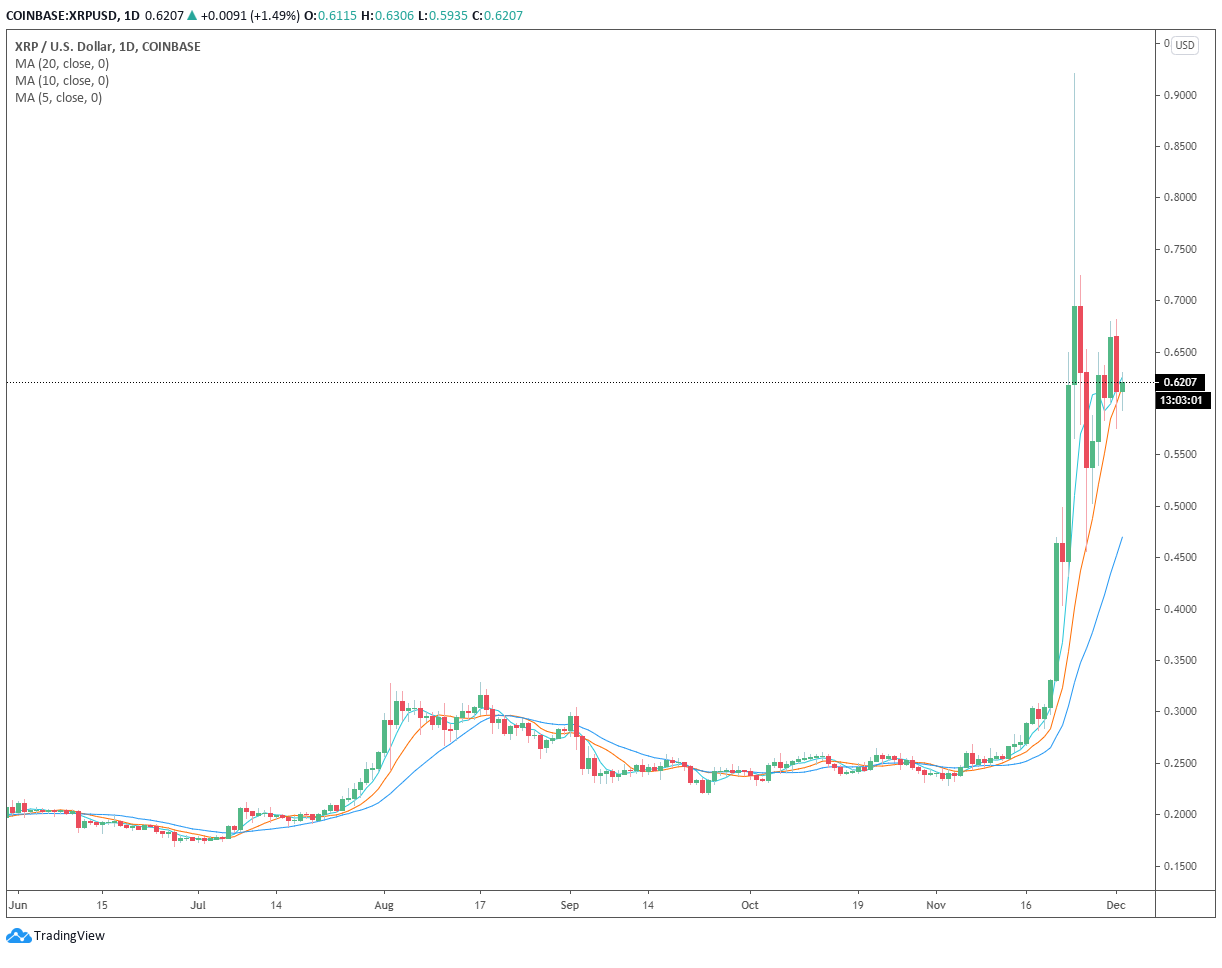 The optimistic market sentiment around Bitcoin likely led traders to explore higher-risk short-term trades. The result was a large surge in volume as traders rushed into altcoins.

“Bitcoin has been the focal point for much of the crypto community, but altcoins are also making waves as investors look to alternative cryptoassets to diversify and make gains elsewhere. XRP’s increase in month-on-month trades is entirely logical in the context of November’s price rise. The token rose from $0.240 at the start of November to $0.661 at the end of it.”

Other likely factors include historic market trends and a spike in retail interest. In January 2018, the altcoin market saw a mania driven by retail investors. At the time, XRP and Ether (ETH) were the biggest drivers of the altcoin market’s rally.

In fact, over the past month, the Google search term “XRP” surged to its highest levels in three years, suggesting that retail traders were returning. The most likely reasons for this include XRP breaking out of a multiyear downtrend and the perceived “cheaper” value compared to Bitcoin in the eyes of the public.

As Cointelegraph reported, the demand for XRP also rose so quickly that Coinbase suffered a temporary server outage to the ire of its users.

Altcoins tend to rally and play catch-up when Bitcoin steadies during a bull market. This trend occurs because traders often look for higher-risk plays when the BTC price is consolidating.

Peters noted that Bitcoin saw an explosive price movement in November, and has seen minor, if not predictable, pullbacks. For altcoins, this is an ideal period for gains as it makes them more compelling for retail traders. Peters added:

On the other hand, altcoins are always at risk of a major crash in the event of a BTC price correction. During bull markets, altcoins are likely to follow the price movement of BTC albeit with more volatility, which puts altcoins at risk of extreme short-term price swings.

Nevertheless, technical analysis shows a bright outlook for XRP, whose price is now at the highest levels in over two years.

“The higher time frames give a clearer indication of where XRP is located in the market cycle,” trader Michael van de Poppe noted in his latest XRP price analysis. “A multiyear downtrend was broken to the upside, meaning that dips will likely be considered as entry opportunities for traders.”

With this in mind, if XRP holds $0.45 as support, continuation toward $1.00 is likely, particularly if Bitcoin price hits a new all-time high.