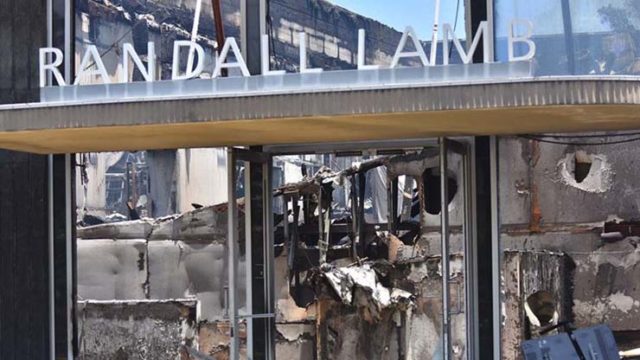 Randall Lamb, a consulting engineer company, was gutted by vandals’ fire. It was a La Mesa historical building. Photo by Chris Stone

A Campo man was arrested Tuesday in connection with setting a fire that destroyed the Randall Lamb Building during a night of mayhem that followed protests May 30 in La Mesa.

The historic commercial structure was one of several buildings, including two banks, burned to the ground during the unrest.

Two other men have been arrested in connection with the fires and the looting of stores during the chaotic demonstration.

On May 30, a crowd gathered in front of the La Mesa Police Department at 2:30 p.m. to protest the May 27 arrest of Amaurie Johnson at the Grossmont Transit Center, as well as the in-custody death of George Floyd in Minneapolis on May 25.

A portion of the group then marched onto Interstate 8 at Baltimore Drive, blocking traffic in both directions for hours.

Around 6 p.m., protesters remaining in front of the La Mesa Police Department threw rocks and water bottles at an armored police car nearby, and police deployed tear gas, pepper balls and bean bag rounds in an attempt to disperse the crowd.

Runge said crimes committed in the city May 30 and into the next day included arson, vandalism, burglary and theft.

Sandoval faces charges of arson and felony vandalism. Bail was set at $500,000, according to authorities.

No arraignment date for the suspect was listed in jail records as of Tuesday evening.