This is your opportunity to follow a Real Pro Trader – LIVE

Since August 2020, Pro Trader has been sharing his trading analysis and results on our blog.

He has consistently made 3 and 4 figure profits EVERY WEEK

Now he is going to share his TOP TRADE every day

– All his pre match analysis

– How and Why he selected the match

– The exact markets to trade

– When to ENTER and when to EXIT

>> Get exclusive access to our resident Pro Trader today

ProTrader started his career and fascination with the financial markets as an Index Analyst at FTSE. He has since consulted for 15 years for some of the top Financial Institutions and Investment Banks in the world, where he specialised in financial instruments, pricing data, trading platforms and risk management solutions. He first started trading sports markets in early 2000, after the introduction and discovery of Betfair. He now trades the financial markets whilst working on entrepreneurial ventures with a focus on sports trading apps and e-commerce. He lives with his wife and young daughter between their homes of London, Sardinia, Odessa and Sochi. In his spare time, he is writing a book, enjoys outdoor pursuits with his family, learning Russian and of course, trading football markets.

This is the last weekend of matches across the major European leagues and cups before a 12 day International break. The following games are targeted for trading opportunities:

I took a conservative back position on Crystal Palace just after kick-off for £30 at 2.7.  When Leeds scored to make it 2-1, I came out of the trade slightly fearing a draw was on the cards. Later in the second-half with the home team scoring a third, I closed the position for £9 profit.

Expecting a West Ham win, before kick-off I took a back position at average odds of 1.89 for £113.  With West Ham eventually running out 1-0 winners somewhat fortuitously (thank you Mr Lookman!), this position produced £96 profit.

This market was traded covering various outcomes, including the eventual result of 1-0. In the end, this market produced £22 profit.

The final day of top European League action before the somewhat disruptive and unnecessary International break. The matches that I will be looking at today are:

Half-way through the second-half and with the score 0-0 and expecting a goal, I took a lay position on the draw for £50 at 2.16. After Tottenham scored a late 88th minute goal, I still closed this position for a £42 profit just in case West Brom got an equalizer.

In the second-half with the score 0-0, I took a speculative lay position on ‘No’ at 1.26 for £40. The rationale here, that if a goal came soon, this position could then be closed for a profit. However, with the only goal coming so late, this went on to produce a £10 loss.

From my analysis, and looking at the Arsenal line-up, before kick-off I took a lay position on Arsenal at 1.67 for £50. After a couple of more trades at different points, this was closed for £49 profit.

Even when there’s not so much going on, I still scan the markets to see what is taking place and where the liquidity lies. From that I can then quickly carry out analysis and make an assumption on an individual match, depending on the time it has reached. The following match gives an example of this.

Tonight it’s the beginning of the International friendlies. When approaching these kind of matches, it is always best to be more conservative.

Analysis showed value in backing both teams to score, and so just after kick-off I took a back position on ‘Yes’ at 1.94 for £50.  With Switzerland scoring early, and Belgium also scoring, this market was closed and banked £45 profit.

With it looking like a ow-scoring game, I took a back position on unders at 1.7 for £55. Later into the match I closed this position for £30 profit.

An England win looked inevitable, but with their price around 1.4 and Ireland previously being quite defensive I decided to pursue other markets.

I took a back position on unders at 1.88 for £50. With England scoring two goals in the first half, this position was now looking precarious. I decided to leave it open, but England were then given a penalty that was scored, and so this position produced a £50 loss.

With analysis indicating that Ireland would not score in this match, I took a back position on ‘No’ at 1.61 for £40. With the match ending with no goals from Ireland, this market produced £16 profit.

After seeing that Scotland took the lead, I expected Serbia would at least equalize, and so took a lay position on Scotland at 1.4 for £50. When Serbia equalized, I closed the position for £43 profit.

Analysis pointed to both teams scoring in this match, and so I took a back position on ‘Yes’ at 1.9 for £50. Bolton against the odds scored early in the first half, and profit could have been taken at this point. However, it was expected that Salford with their form at present would score and so the position was left open. However, this didn’t materialize for Salford, and with the match ending 2-0, a £50 loss was taken.

Before kick-off, I took a speculative back position on Bolton at 3.7 for £38. After Bolton scored first, I layed this position, and then later closed this position to bank £43 profit. In hindsight, if this was left as it was it would have made £110 profit.

Overall, this week made £506 profit (Betfair commission at 5% included). This drop from previous weeks is to be expected, since there have been less matches available due to the International break, and with the type of matches bringing a more conservative approach.

Predicting and trading football matches is difficult. It’s even more difficult when looking at International Friendlies or from leagues that you are less familiar with.

However, putting this aside, there are two matches today that I am very confident on predicting positive trading opportunities for at decent prices.

The trading advice for both of these matches will be posted on my Trade of The Day page a few hours before kick-off, once team line-ups have been reviewed (approximately 5pm GMT).

Later I also started trading crypto-currencies, such as Bitcoin and Ethereum, which I still do today when I believe there is a profitable trade on.

The difference I have found with football markets is that you can actually see and know why prices are moving the way they are. This is not possible on the above markets I mentioned, since there is so much inside information, that even all the analysis in the world won’t uncover. With a football match, it is much more straight-forward, i.e. a team scores, their price goes down. It’s obviously not quite as simple as that, but it is definitely easier than guessing on the World price of gold, or why a crypto currency may go up one week and down the next.

I truly believe there is no better time to get involved in trading Football markets. The epidemic of Corona-virus is making the world almost house-bound for the foreseeable future. Maybe you have had your own working practices affected by this, especially if working in hospitality or sectors that have had to close their business. When will it all resume as normal? Unfortunately, no-one knows the answer to this.

However, even under closed doors stadiums, football matches will continue. Maybe you too can make a comfortable profit from just one football match a day. It’s certainly a good start to having an additional income stream, with no start-up costs or normal business regularities and uncertainties. There’s also no tax required to pay on profits.

Not every recommended trade will go to plan; that would be unrealistic. But when trades are seemingly going to go against a recommendation I will provide details on how to minimize risk by using strategic exit points, and sometimes other markets to hedge trades and still come out with a profit. This is my number one rule: Always look to protect capital and profits.

To follow these trades, you will need to have access to one of the exchanges. The primary exchange I use is Betfair, so prices quoted on other exchanges may vary.

I hope you are willing to join me on this adventure to strategic thinking, developing additional revenue streams and taking opportunities for the future.

>>> Get exclusive access to our resident Pro Trader today

ProTrader started his career and fascination with the financial markets as an Index Analyst at FTSE.  He has since consulted for 15 years for some of the top Financial Institutions and Investment Banks in the world, where he specialized in financial instruments, pricing data, trading platforms and risk management solutions.  He first started trading sports markets in early 2000, after the introduction and discovery of Betfair. He now trades the financial markets whilst working on entrepreneurial ventures with a focus on sports trading apps and e-commerce. He lives with his wife and young daughter between their homes of London, Sardinia, Odessa and Sochi.  In his spare time, he is writing a book, enjoys outdoor pursuits with his family, learning Russian and of course, trading football markets.

Importance of a VPN while dealing with cryptocurrencies Since the beginning of September, XRP has been trading in a range of $0.23-$0.26 with the exception of a slight deviation below the support area on Sept 19.

Yesterday XRP finally closed a daily candle above this range at $0.265. It continued climbing in the early morning hours to reach $0.28 but has since pulled back to $0.272.

If XRP continues to rally, the next closest resistance area would be found at $0.295. 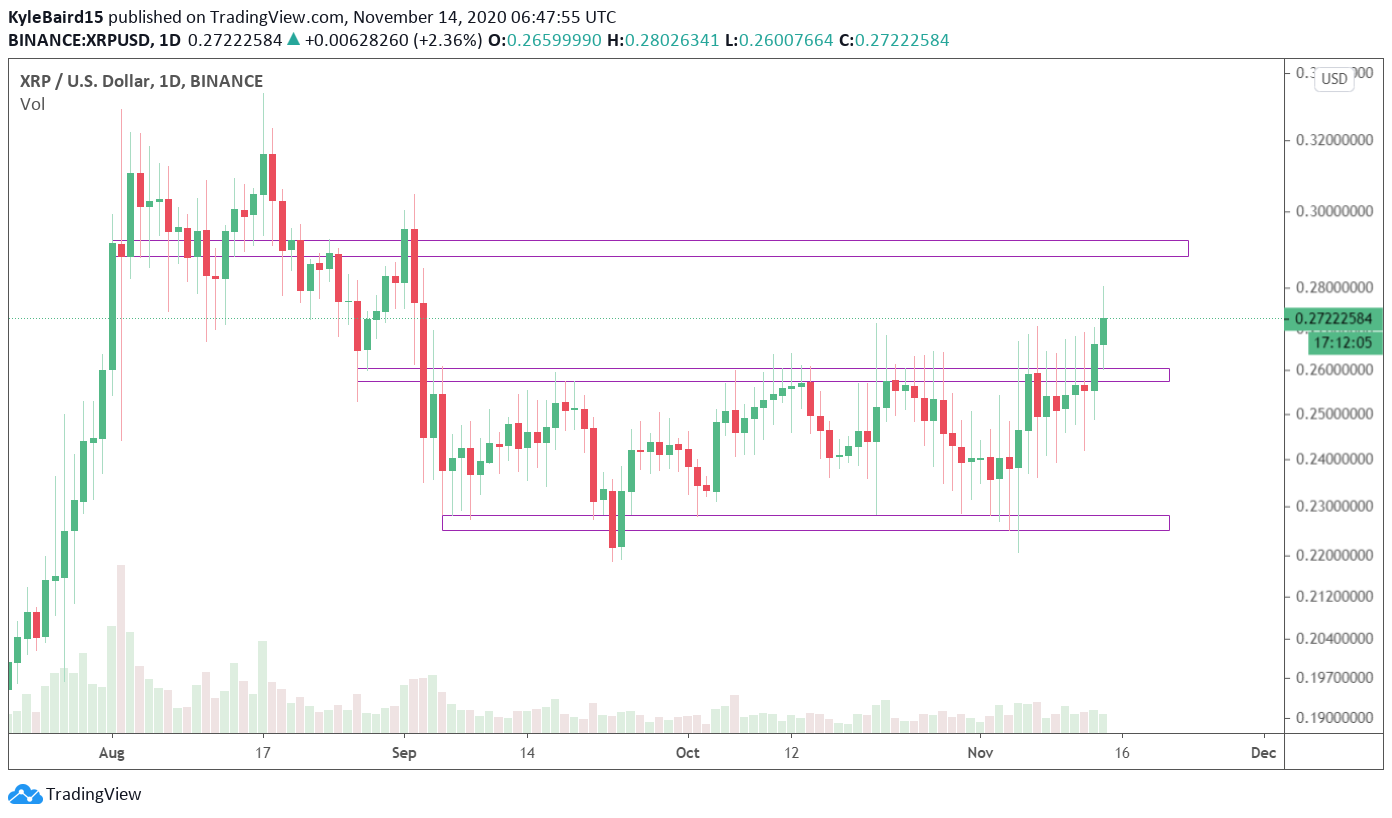 Technical indicators in the daily time-frame are bullish but do not yet confirm a bullish trend.

Both the RSI and MACD are increasing, the former being above 50 and the latter above 0. Their slopes are gradual and the Stochastic Oscillator has not yet made a bullish cross.

Another daily close above this resistance area would likely mean that XRP will continue moving up to $0.29

The shorter-term 4-hour chart shows that the price has been trading inside a parallel ascending channel since Sept 24.

Movement contained inside a parallel channel is often corrective, which could mean that the current increase is corrective rather than the beginning of an upward trend.

A breakout from the channel would invalidate this scenario and may take the price towards the previously mentioned $0.295 resistance area.

Cryptocurrency trader @gordongekko369 outlined an XRP/BTC chart,  which shows the price in a downward trend. However, he predicts that the trend will soon reverse and XRP/BTC will begin to move upwards.

The XRP/BTC chart shows a rapid decrease that has been going on since the beginning of October, during which the price has lost nearly 30% of its value.

The decrease has temporarily halted and XRPBTC has created a double bottom near 1,565 satoshis. This is normally considered a bullish reversal pattern. Furthermore, the pattern is combined with a bullish divergence in the RSI, making it more likely that the price will reverse.

However, the lack of horizontal support makes it more difficult to confidently predict a reversal.

Disclaimer: Cryptocurrency trading carries a high level of risk and may not be suitable for all investors. The views expressed in this article do not reflect those of BeInCrypto SEC Awards an Analyst $1.1 Million Under its Whistleblower Program