This week in DeFi was notable for its lack of notable events. Nobody set new records for the fastest hack of a new contract, nobody famous exit scammed or pulled a DeFi Jesus reincarnation act.

You can just feel that something is different now. It used to be that every weekend we’d discover some new exotic food, or someone would launch a vampire attack on another protocol with a cleverly disguised Ponzi scheme.

Not to say nothing happened at all this week, but the scope just feels different this time.

What really grabbed attention was the price collapse of a great deal of DeFi tokens, captured quite well in the various DeFi indices launched lately. The darlings of the yield farming era took the brunt of the damage.

The DeFi Pulse index lost more than 20% in a week.

Compound’s COMP broke through its August price floor of $127 to touch $100. Yearn Finance’s YFI is now down 66% off its all-time high. SushiSwap’s token is just entering a death spiral: after topping out and losing almost 90% of its value in September, it has lost another 50% since the last newsletter. The Uniswap token just completely gave up and broke the psychological barrier of $3, which was the price initially used to make the “$1200 DeFi stimulus check” analogy.

One glimmer of hope is that the DeFi total value locked is still high at $10 billion, which some analysts say is a sign of solid fundamentals.

I respectfully disagree with that hypothesis. I’ve written at length about how TVL is really not representative of anything with the advent of yield farming. The Total Value Locked of Uniswap, Compound, SushiSwap, Curve etc. is only this high because new tokens are being constantly printed to subsidize it. Protocols like Maker or Aave are also receiving a second-order windfall from the DAI demand or token price rallies. 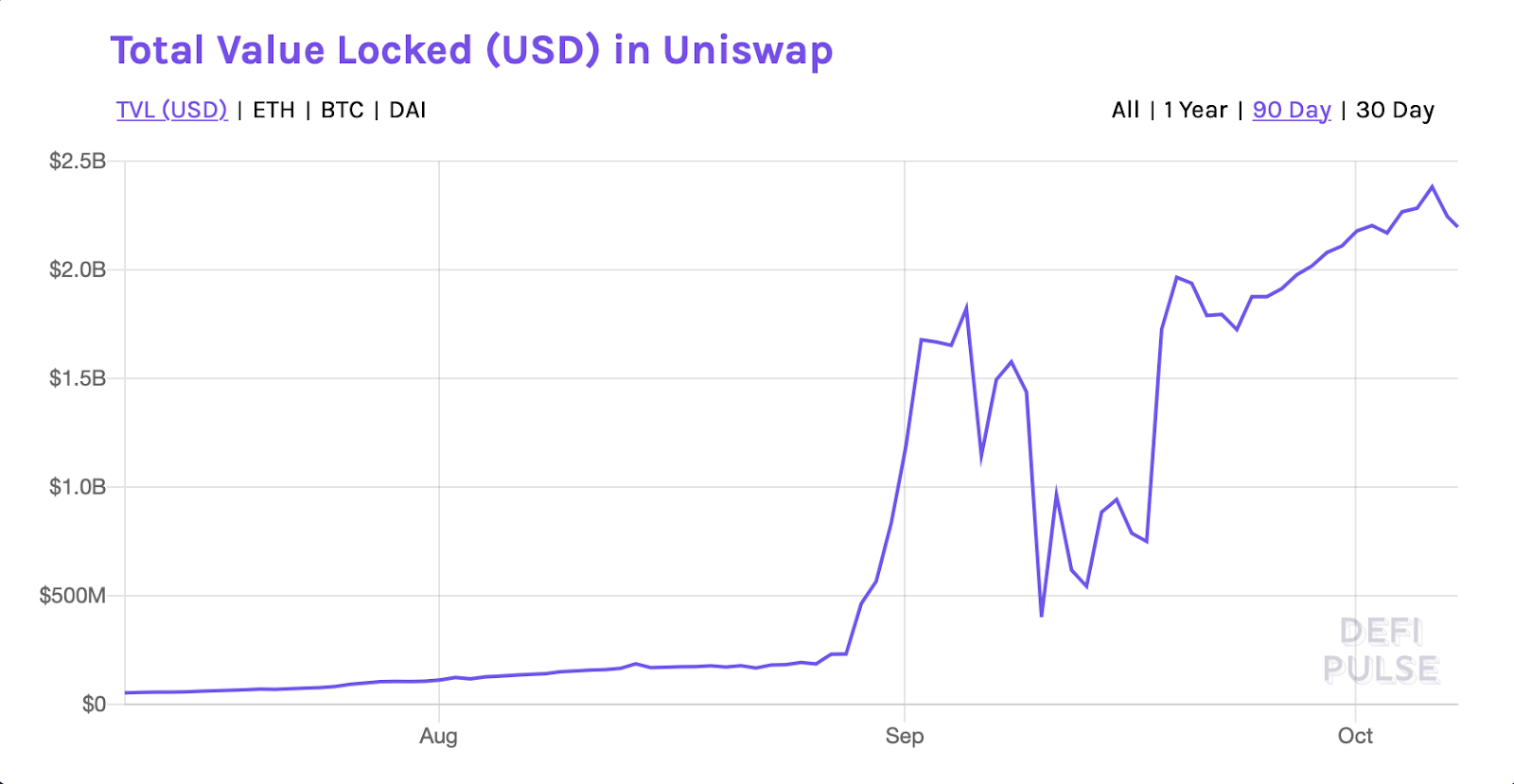 SushiSwap and the UNI token were launched just before those spikes.

The double-counting issue is becoming painfully obvious, too. For example, WBTC has its own entry in the DeFi Pulse rankings, with $1 billion in value. Except that more than 83% of its supply is in the pools of other projects, notably Uniswap, Maker and Curve.

A major source of double-counting is DAI — the collateral used to create it gets assigned as Maker TVL, and then DAI itself is counted when it makes its way into Uniswap or Compound. With DAI, one could argue that the collateral and the stablecoin itself serve different purposes, so it makes sense to consider both instances. But WBTC is just a token that does nothing on its own — it’s like counting the entire Ether supply as TVL in DeFi.

In any case, I don’t think the community has yet realized what happened. We saw with the Ethereum congestion that DeFi hit its ceiling in terms of users and activity. It has been a great journey, mixed with both questionable stuff and outright successes (for example, I’m in awe of Uniswap reaching centralized exchange-levels of liquidity and volume). 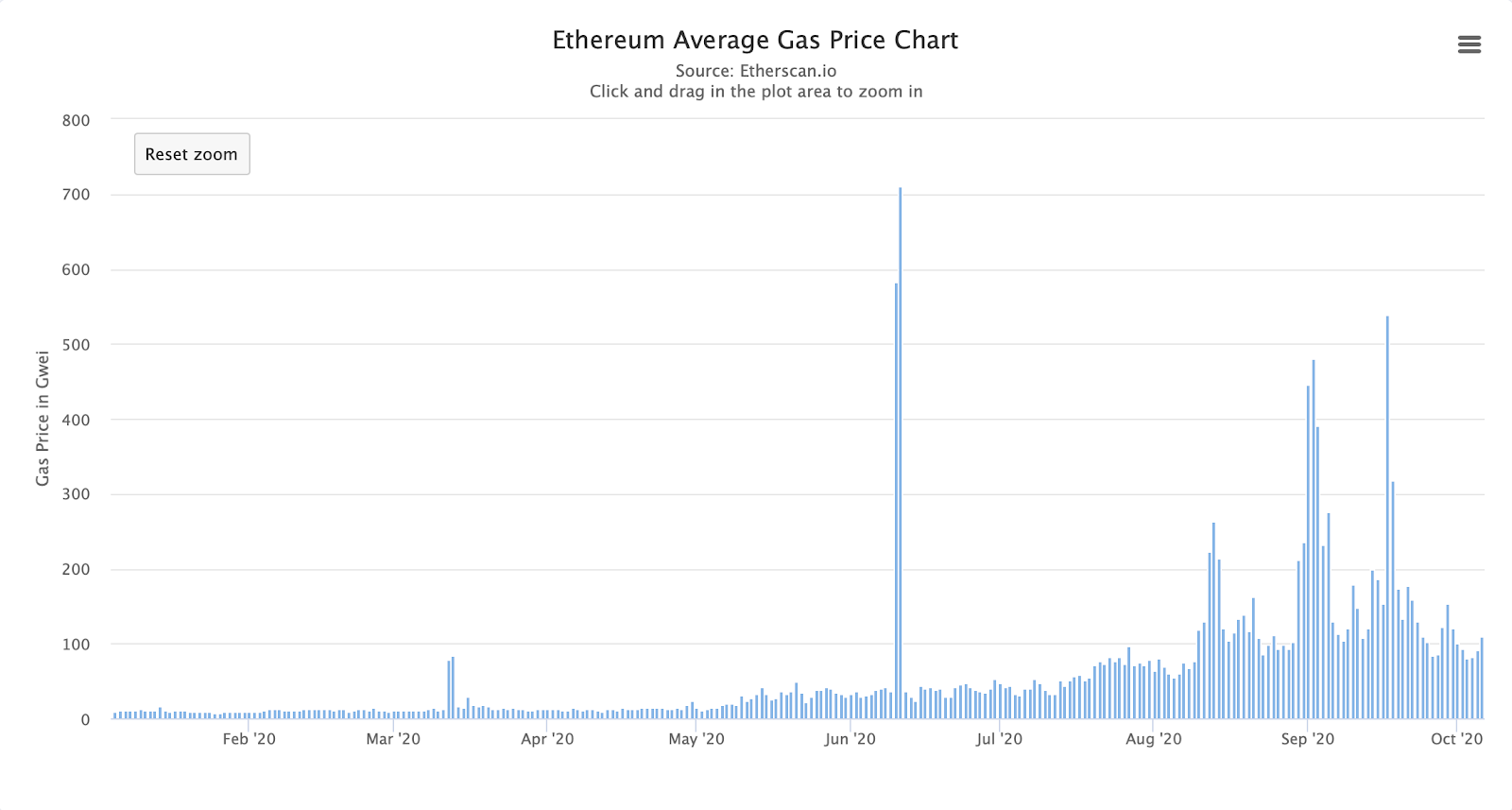 The average gas fee has been unreasonably high for months. Source: Etherscan

But now, in a similar vein to crypto in 2018, it’s all about scaling and development to bring about the next wave of projects and success. I’ve heard explanations that people fueling the rally thought this is DeFi’s push for the mainstream, and that the market was set to grow to hundreds of billions of dollars.

Instead all we got is blockchain congestion and a valuation metric that became a cesspool of circular dependencies and poor accounting. Unfortunately, when markets go up too much, they also become extremely unhappy when they realize that the fundamentals behind the rally were lacking.

So the gist is that I don’t think the market’s really done dumping. I don’t have a crystal ball and I may be wrong, but I’ve been in crypto long enough to know that we haven’t reached bottom until everyone starts to only talk about the technology and the challenges ahead while criticizing the excesses of the bull market. (So basically, everyone is like me.)

Meanwhile, I think it’s worth musing on technology advances that could support the next rally.

There are two primary ways that DeFi can scale in the short-term: Ethereum layer two solutions and bridges to other blockchains.

Competition is fierce on all fronts. On layer two you have as main contenders Optimistic Rollups and Zk-Rollups. The former allow developers to port Ethereum smart contracts almost one-to-one, but have quite a few user experience kinks. The latter seem to be easier to use, but require rewriting the contracts to a new language. Both types are still in the testing stages and we should expect to see them in action in 2021.

As we wait for that, there are a host of other blockchains eager to provide their throughput as an alternative to Ethereum. Polkadot is quite clearly positioning itself to accept Ethereum liquidity, but there’s also Binance Smart Chain, NEAR, Serum/Solana, NEO, Cosmos and many others.

The latest contestant is RSK, which announced the integration of Dai this week. It becomes fairly easy to transfer liquidity over there in a relatively stable form, and then use that in the RSK DeFi ecosystem.

But the problem right now is that all bridges are either non-functional or centralized — the latter seen in RSK, Binance and FTX’s Serum.

Also, the liquidity bridge approach probably requires a sizable DeFi ecosystem on the other chain to be useful. If DeFi activity — which so far has been mostly about chasing yields or leveraged trading — winds down, there’d be no reason to jump ship and seed the outsider’s initial ecosystem. Finding other use cases will be crucial, and if another blockchain gets there before Ethereum, it might win the race.

For now, it’s hard to predict who will win. Ethereum still has no reason to worry about its lead.

One consequential, but perhaps overlooked news of this week was the discovery of live instances of miners using their power to extract value from the DeFi ecosystem.

This confirms the theoretical concept of Miner Extractable Value, or MEV, highlighted by some researchers back in 2019. The issue stems from the fact that transaction ordering in a block is very important for DeFi, and miners have free reign to choose which transactions to include and in what order.

In this specific instance, it appears that a few minor pools mined transactions with zero fees to take advantage of an arbitrage opportunity. The fee was set to two Wei, the lowest Ether unit, so it was clearly a transaction that never would’ve made it under normal circumstances.

The discovery could signal the start of open season on DeFi for miners. But it’s not all bad — miners would make for excellent arbitrage traders and debt auction maintainers, so they could actually make the market more efficient. But of course, in doing so they would crowd out normal users.

The biggest threat is potential competition between miners for high value MEV, which could result in chain forks and reorganizations. I feel like that’s unlikely to happen, but MEV is definitely a serious problem in terms of overall fairness.

The primary solution being studied right now is just to “institutionalize” it by holding MEV auctions. Perhaps more work is needed to find a way of neutralizing it, but there is plenty of time as the problem is not going away. Miners is used as a generic term — anyone who has control over blocks and transactions has the same power. That includes stakers and at least some types of layer two operators. Polkadot has come with an interesting and secure way of funding crypto projects via a new concept dubbed Initial Parachain Offering (IPO) by leveraging its parachain architecture and using its native DOT tokens.

The blockchain technology is all set to replace the traditional financial instruments, and Polkadot plans to lead the show. In a press release shared with CoinSpeaker on Tuesday, October 6, Polkadot revealed details of its latest offering Initial Parachain Offering (IPO).

The Polkadot IPO aims at introducing a completely new model to launch blockchain and other decentralized projects. The idea is to create a transparent and scalable process while eliminating other uncertainties coming in midway. Drawing cues from the traditional IPO (Initial Public Offering) markets, crypto markets came with the concept of Initial Coin Offering (ICO) for fundraising of new crypto projects.

The ICO market saw a massive rush of investors during the crypto market bull run of 2017. However, it soon lost steam after several projects turned fraudulent looting investors with millions-of-dollars. The ICO model was later replaced by IEO (Initial Exchange Offering) where exchanges offered cryptocurrency projects the launchpad to enter the market. Here, the exchanges leveraged its credibility with its customers, however, the process remained centralized to an extent.

The Initial Parachain Offering (IPO) takes a shot on reviving the crowdfunding mechanism. The IPO resides on Polkadot’s core architecture of parachains, which are nothing but multiple parallel blockchain shards contributing to the scalability of the network.

Parachains are specialized shards on Polkadot. Find out more about them and the process of obtaining a parachain slot: https://t.co/ZE2JGW1DPR

This will allow parachains to share Polkadots features like interoperability, scalability, security, and governance functionality. Now, let get back to understanding how the Polkadot IPO will work.

The current goal of Polkadot is to support 100 parachains connected to its blockchain. Since the parachain slots are limited, they will be auctioned through a permissionless auction process. To participate in the auctions, the parachain projects will need to undergo the Initial Parachain Offering process.

This will allow projects to accept DOT loans through DOT token holders. Funds raised via this crowdfunding module will directly go into the Polkadot Relay Chain. The press release further explains:

Thus, the Polkadot Relay chain will work as an escrow ensuring fund safety for the DOT holders. This is unlike the Ethereum‘s ERC20 tokens ICO funding where investors send their ETH to an unknown address and can’t withdraw later if the project fails. In Polkadot IPO, investors also get their DOT tokens back by the end of the parachain lease period. It helps to ultimately create a more safe and secure environment for investors and projects alike.

The concept of Initial Parachain Offering looks promising at this stage. It aims to address other existing flaws within the crypto ecosystem thereby bringing a new value proposition of fundraising to the crypto market. Polkadot has seen good seen success recently with the native DOT tokens entering the top ten crypto ranks. At press time, each DOT token is trading at $3.77 with a market cap of $740 million.

Bhushan is a FinTech enthusiast and holds a good flair in understanding financial markets. His interest in economics and finance draw his attention towards the new emerging Blockchain Technology and Cryptocurrency markets. He is continuously in a learning process and keeps himself motivated by sharing his acquired knowledge. In free time he reads thriller fictions novels and sometimes explore his culinary skills. Best Cryptocurrency to Invest in Now – How to Buy, and Where

Bitcoin Fundamentals are in 'Moon Mode' Now: Will Market Respond Only In 2021?