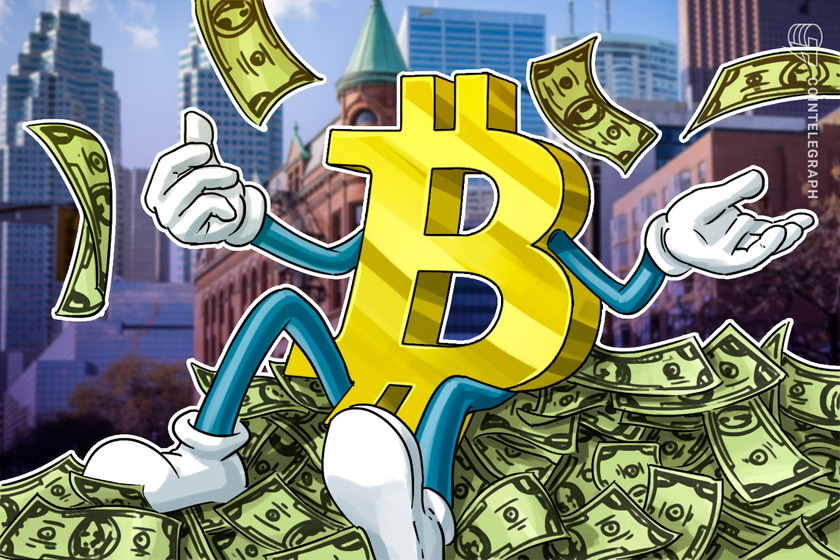 Shares of Canada’s first publicly listed Bitcoin fund are up 30% since its launch in April.

Tyler Winklevoss, a major cryptocurrency investor and a co-founder of United States’ Gemini crypto exchange, congratulated 3iQ on the milestone.

Big Milestone. The #Bitcoin Fund by @3iq_corp that trades publicly on the Toronto Stock Exchange under $QBTC.U, just passed the $100 million mark. Onward!

As previously reported, 3iQ launched its Bitcoin fund in April 2020, listing the Bitcoin Fund’s shares (QBTC.U) on the Toronto Stock Exchange. At the launch, the Bitcoin Fund listed nearly 1.5 million Class A shares on the exchange.

In conjunction with a new market cap milestone, the Bitcoin Fund’s shares have seen significant growth since its launch. At publishing time, QBTC.U is trading at $15.80, up about 30% from $11 when it was listed in April.

At the launch, Winklevoss claimed that it was the “first public Bitcoin fund listed on a major stock exchange.” Winklevoss’s Gemini exchange is providing crypto custodian services for the Bitcoin Fund.

In January 2018, 3iQ reportedly became the first crypto fund regulated by the Ontario Securities Commission and the Canadian Securities Administrators. Ethereum’s price action has been incredibly lackluster compared to that seen by Bitcoin and the rest of the crypto market.

While BTC pushes up towards fresh yearly highs of $13,000, the rest of the crypto market has remained fairly stagnant.

In particular, ETH has only seen tempered gains and remains well below its 2020 highs of $490 set at the peak of the DeFi hype cycle.

It is important to note that Ethereum is now gaining some stability above $380, but its lack of momentum compared to that seen by Bitcoin remains concerning to some investors.

That being said, analysts now widely believe that the cryptocurrency could be overdue for a serious move higher, potentially sending it past $400.

One trader said that he is watching for ETH to “teleport” past its key $400 resistance in the coming days, which could spark some life into altcoins and maybe even renew the DeFi hype cycle that fizzled out over the past few weeks.

Today’s Bitcoin rally to $12,700 was news-based, as it came about close on the heels of reports regarding PayPal’s foray into crypto.

Although this news only had a noticeable impact on Bitcoin, it is equally as relevant for Ethereum, as PayPal will now allow users to buy, sell, and store BTC and ETH – as well as a few other digital assets.

At the time of writing, Ethereum is trading up just over 5% at its current price of $388.

Its upsurge today has been promising, as it sold off yesterday in tandem with Bitcoin’s push past $12,000.

It still has a long way to go before it can reach parity with BTC’s gains over the past week.

While sharing his thoughts on Ethereum’s present technical outlook, one analyst explained that he is watching for it to see a sharp upswing past $400 before facing any serious resistance.

He notes that the resistance just above its current price is quite weak.

“ETH – Done messing around. Time to teleport Ethereum to $400+. Not much resistance on the way towards the EQ.”

If Ethereum breaks $400 and can flip this level into support, it could act as a launchpad that sends the cryptocurrency rocketing higher in the weeks ahead. In October of 2020, Fasset Crypto exchange announced that it had entered the Bahrain Fintech Sandbox and launched the first zero commission crypto exchange, as well as was working on the first tokenization platform license from Bahrain as well. As a follow up UNLOCK recently interviewed Mr. Mohammad Raafi Hossain, Chief Executive Officer of Fasset Crypto Exchange.

Hossain had always been an academic focusing on the environment in his undergraduate and graduate studies. His passion was sustainable development and worked in the UN on these topics. As he told us, “While working with UN I noticed environmental issues related to desertification, water scarcity and others and during my work in the UAE within Prime Minister office I became exposed to technologies such as blockchain AI and others and starting to think about the intersection between alternative financing and sustainable development goals and here is where blockchain came in.”

As for the launch of Fasset exchange and tokenization platform Hossain explains, “Tokenization will one day become ubiquitous and mainstream just as blockchain and crypto will be, but for it to become a mainstream solution, it has to interact with the real world and this bridge is tokenization.”

According to Hossain tokenization has yet to be successful because of the liquidity issues, as he explains,” If I cannot move those tokens and exchange them with monetary value than it is as good as a contract on a lawyer’s desk. So at Fasset we intend to digitize assets provide incentives to different asset owners and investors to interact which include not only ability to trade these digital assets but also monetary incentives for doing so through our Fasset governance model.”

He adds, “So the tokenization platform built on Ethereum blockchain will give investors and asset owners a platform to interact and the Fasset crypto platform will usher in the masses and provide a secondary market for these tokenized assets to be exchanged.”

Fasset is proud to be part of Bahrain’ Central Bank Sandbox and is pleased that the regulator and Economic Development Board has understood and supported Fasset in both its tokenization license as well as secondary market exchange. As Hossain commented, “This hasn’t happened before to have a license for both a tokenization platform and a trading platform, and we see this as the future of tokenization projects.”

At the moment Fasset is the custodian but Hossain plans to have a third party as a custodian once they finalize testing as this will provide further assurance to the market. Hossain plans to be graduating from the Bahrain Central Bank sandbox by Q1 or Q2 of 2021.

As for why Bahrain, Hossain was quick to reply that after setting up their headquarters in UK, they chose Bahrain because it was an onshore license and this would allow them to gain a lot of know-how and wisdom. He did state however that they are interested in gaining a license in ADGM (Abu Dhabi  Global Market) as they expand their licenses and operations in other countries in the region.

Hossain does not believe they are a latecomer to the crypto exchange scene as they are targeting the masses with simple way to trade, with enhanced password and wallet applications.

Fasset is now working on several asset tokenization opportunities to generate yield from. He states, “We will be launching several tokenization projects from Europe as well as the region. These are high yielding assets that are coming from international community and we are working on how to domicile foreign assets into Bahrain.”

In terms of liquidity; Fasset is well set according to Hossain, first because of the investments already made into Fasset from Family offices and investors who are veterans of the banking environment. He explains, “Our liquidity has allowed us to provide zero percent fees on our crypto exchange and it is through our tokenization platform that we will make revenues.” As such at the moment Fasset is not actively seeking investments while in the sandbox environment. DragonEx crypto exchange suspended deposits and withdrawals of all digital currencies on its platform due to issues triggered by OKEx’s ongoing withdrawal freeze.

In an official announcement on Oct. 21, DragonEx said that the OKEx freeze triggered a “crisis of trust” in centralized exchanges among its customers, which in turn fueled a run on funds and deteriorated the platform’s service.

DragonEx is now working on a restructuring plan in order to resume deposits and withdrawals on the platform. The company’s representatives said that the exchange will have to shut down if they don’t manage to successfully reorganize by Nov. 2, 2020.

The exchange also mentioned that the exchange suffered a large-scale hack in March 2019, costing over $7 million in user losses. The company’s executives wrote that after more than a year of hard work, the stolen assets have not been recovered.

News of DragonEx’s impending closure comes shortly after OKEx partially resumed some services on its platform after suspending withdrawals on Oct. 16. On Oct. 21, OKEx announced that it is resuming its peer-to-peer digital currency exchange services with three fiat currencies like the Chinese yuan, the Indian rupee and the Vietnamese dong.