Boris Johnson has said the UK has “freedom in our hands” and must make the most of it as the country prepares to leave EU trading rules at 11pm.

Historic changes to rules on travel, trade, immigration and security are to come into force as the UK enters a new era of relations with the continent.

UK officials have insisted new border systems are “ready to go” amid concerns about possible delays at ports.

The PM said the UK could now do “things differently and if necessary better”.

The trade deal agreed by the two sides on Christmas Eve, and passed by MPs on Wednesday, avoids the need for import taxes – tariffs – after the UK leaves the EU’s internal market and customs union on 1 January.

While fears of giant tailbacks of lorries at Dover have receded, uncertainty remains about new customs rules and the government has warned there will be “some disruption” in the coming days and weeks.

To reduce the risk of delays, the UK is phasing in checks on goods entering the country from the continent over a six-month period up to July 2021.

But some new customs procedures will come into force on the UK-side immediately from 11pm, such as on imports of alcohol, tobacco, chemicals and controlled drugs.

EU member states are introducing full customs declarations and other controls on UK exports from 11pm.

Among the other things that will change from 23:00 GMT:

Unlike the rest of the UK, Northern Ireland will continue to follow many of the EU’s rules, as its border with the Irish Republic remains all but invisible.

And the UK will gradually be able to keep more of the fish caught in its own waters, while the European Court of Justice will cease to have any role in deciding disputes between the UK and EU.

If you are Boris Johnson this is huge, and exciting.

If you are a business that’s affected it might mean a big new opportunity, but it might also mean really big disruption and lots of extra hassle.

The fact that there is a trade deal doesn’t take all of the risk away.

The treaty contains lots of uncertainty, not least for the biggest part of the economy: the service sector. Getting the agreement finalised in the time was a big achievement for both sides but there is a lot that it just doesn’t cover that will, in time, have to be worked out somehow.

Mr Johnson – who led the Leave campaign in the 2016 Brexit referendum and took the UK out of the EU in January six months after becoming prime minister, said the UK was on the verge of an “amazing moment”.

In his New Year message, the PM said he wanted the UK to be an “open, generous and outward looking” country that was a global leader in new technologies, fighting climate change and promoting free trade.

“We have our freedom in our hands and it is up to us to make the most of it.”

And he urged the four nations of the United Kingdom to put the Brexit divisions of recent years behind them and focus on their common bonds.

“I think it will be the overwhelming instinct of the people of this country to come together as one United Kingdom – England, Scotland, Wales and Northern Ireland – working together to express our values around the world.”

Intensive preparations have been taking place over the past two weeks to prepare the UK for the coming changes.

The UK’s Countdown Plan has involved operational testing of infrastructure at the border and close co-operation with France, Holland and Belgium.

A government spokesman said: “The border systems and infrastructure we need are in place, and we are ready for the UK’s new start.” 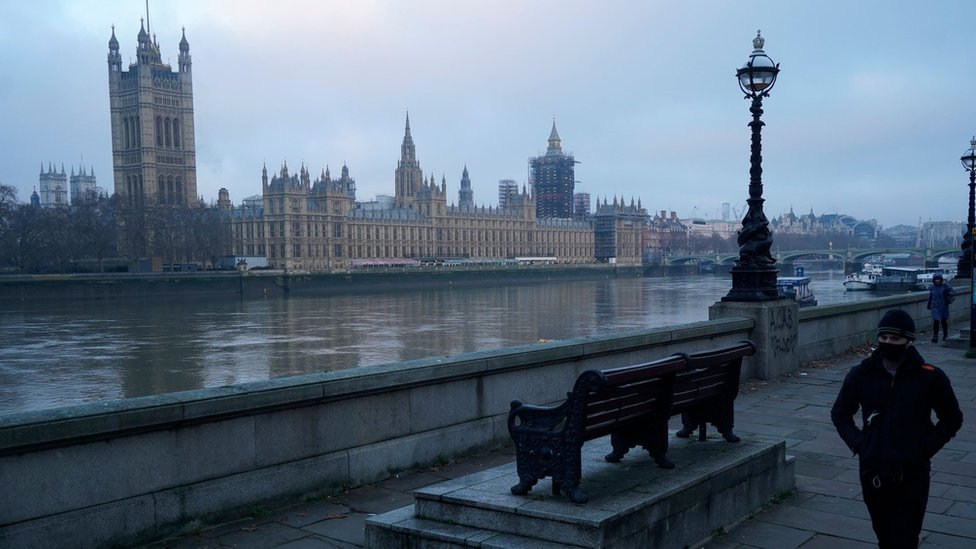 image captionThe UK Parliament was recalled to ratify the deal

But concerns remain that many small businesses are not prepared for the changes and that with lorries without the correct paperwork set to be turned back at Dover and other ports, delays are inevitable.

The government said 450 “Kent access” permits had been issued to HGV lorries intending to cross the channel at Dover on 1 January and hauliers arriving without them would be identified and subject to a £300 fine.

One logistics firm told the BBC it would not send any trucks across until 10 January due to congestion fears although Channel Tunnel Operator Getalink has said it expects the new systems to work smoothly.

Brexit happened on 31 January 2020, but the UK has continued to follow Brussels’ trade rules until now, while the deal was thrashed out.

The free trade deal – agreed on Christmas Eve after nine months of negotiations – finally passed into UK law early on Thursday morning – having also been backed by Brussels.

But opponents say the country will still be worse off than it was while in the EU – and there is still uncertainty about what it will happen to banking and services, which are a major part of the UK economy.

Meanwhile, the UK and Spain have reached agreement on a political framework for Gibraltar which will pave the way for a separate UK-EU treaty regarding the British overseas territory, which was not covered by the trade deal.

Thursday’s agreement means the border between Gibraltar and Spain will remain open.

Google Graveyard: These Google Services Will Disappear In 2020