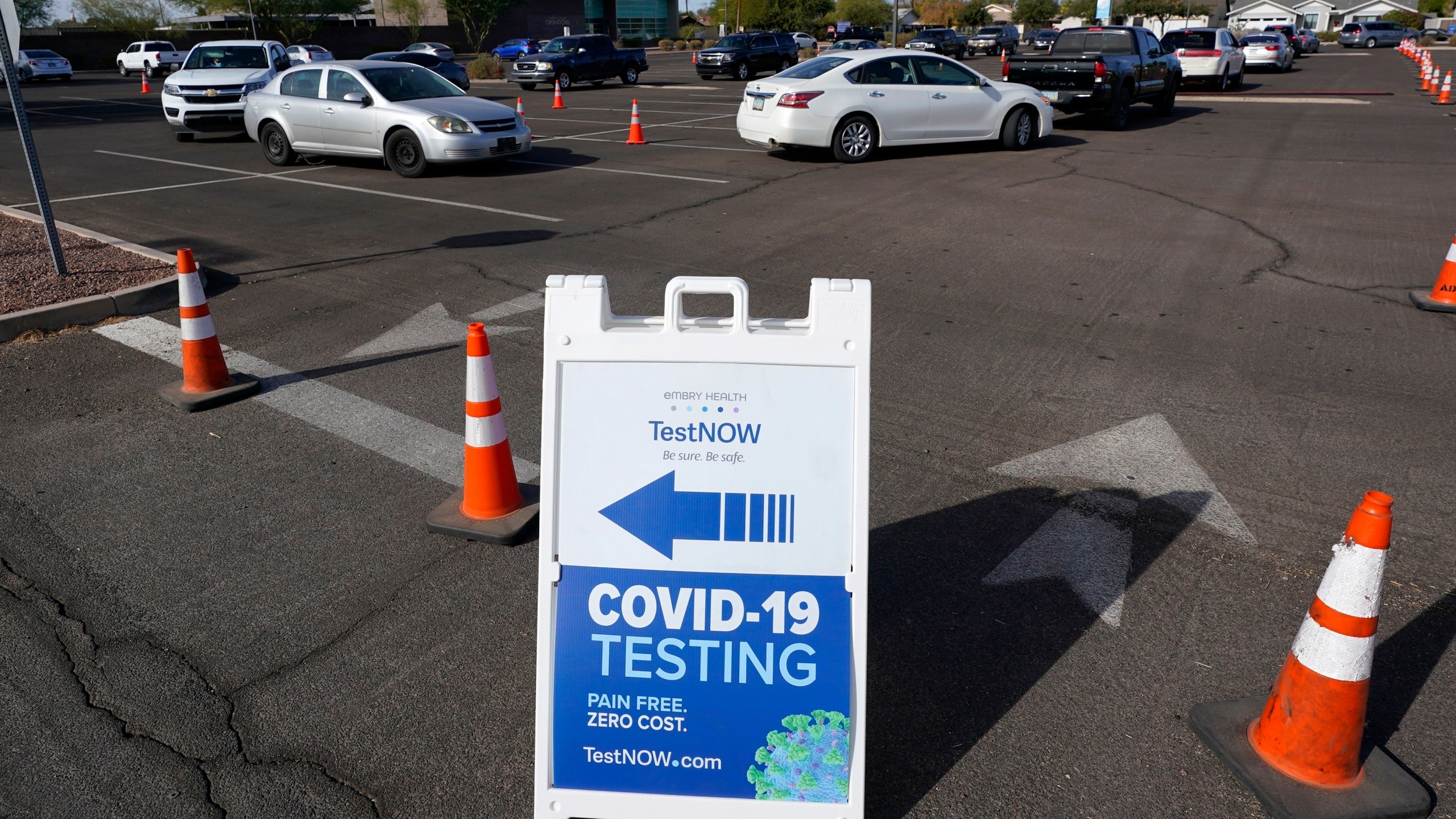 FILE – In this Dec. 8, 2020, file photo, vehicles line up as people wait for COVID-19 tests at a drive-thru testing center in Phoenix. Arizona on Wednesday, Jan. 6, 2021, reported a triple-digit number of additional COVID-19 deaths for the second day in a row along with more than 7,200 additional known cases and another record high of virus-related hospitalizations. The state has the worst coronavirus diagnosis rate in the country, with one person of every 119 people in the state being diagnosed in the past week. (AP Photo/Ross D. Franklin, File)

PHOENIX (AP) — Five months after President Donald Trump hailed Arizona as a model for how it dealt with the COVID-19 pandemic, public health experts warned Wednesday that the state has become “the hot spot of the world” and that health restrictions the governor has been hesitant to impose could have tamped down the crisis.

“It’s way worse than July already, and it’s going to continue to get worse. We’re probably two weeks behind LA in terms of our situation,” Will Humble, head of the Arizona Public Health Association, said referring to Los Angeles County, where a COVID-19 surge has created a shortage of oxygen and led ambulance crews to stop transporting patients they can’t revive in the field.

Health officials in Arizona reported a triple-digit number of new virus-related deaths for the second day in a row and more than 7,200 daily cases, with hospitals strained by a record number of patients.

Arizona has the worst coronavirus diagnosis rate in the country, with one out of every 119 people in the state testing positive in the past week.

Forceful measures like a statewide mask mandate could help reduce cases down the road, but Humble said he doubts Gov. Doug Ducey will change anything. Hospital administrators also are pleading for the state to take greater measures to curb the spread of the virus.

After a stay-at-home order early in the pandemic was gradually lifted, the Republican governor has declined to reimpose restrictions like neighboring California, which also is seeing a surge in infections and overwhelmed hospitals. In Arizona, indoor dining is allowed and gyms are open at limited capacity, businesses that have been more restricted in many other states.

Ducey has rejected calls from health care leaders to tighten restrictions, arguing it would cause people to be out of work. He also dismissed a proposal to have all public schools go to virtual learning for two weeks after the holidays.

“We have a governor and health director who don’t care. Their goal in my opinion is to vaccinate their way out of this,” Humble said. “Eventually it will work. There’s just goin to be a lot of dead people in the meantime.”

A spokesman for Ducey did not immediately return a message seeking comment.

Dr. Joshua LaBaer, director of the Biodesign Institute research center at Arizona State University, called the state “the hot spot of the world right now.” He believes at least one in 10 people actually has the virus.

“That means if you’re at the supermarket, there are people around you who have it but they may not know it yet,” LaBaer said. “It’s not a time where I would recommend people spend time indoors with people who are not their immediate family.”

The state also “without a doubt” will see more deaths than usual for the winter months, LaBaer said. Aside from COVID-19-related deaths, people with other illnesses who hesitate to go to the hospital are at risk.

Dr. Michael White, chief clinical officer of Arizona’s Valleywise Health said the Phoenix-based health care system has no intensive care beds available. Some patients waiting for beds were being treated on gurneys in the emergency department.

“I’ve never seen anything like this in all the years I’ve been part of health care,” White said.

More mitigation efforts in early December would have likely helped with the surge hospitals are seeing now, he added.

Virus case numbers have been trending upward since Arizona bars, nightclubs and restaurants were allowed to fully reopen in September, Humble said. But travel and people gathering for the holidays, starting with Thanksgiving, was “gasoline that went onto the fire.”

A record 4,877 COVID-19 patients were occupying hospital beds as of Tuesday, according to the state coronavirus dashboard.

The Department of Health Services reported 127 additional deaths and 7,206 new cases Wednesday, increasing the state’s totals to 574,680 cases and 9,444 deaths.

Health officials in Arizona reported a triple-digit number of new virus-related deaths for the second day in a row and more than 7,200 daily cases, with hospitals strained by a record number of patients.

Ebang International Holdings Inc. to Launch Cryptocurrency Exchange in the First Quarter of 2021

BTCC Exchange: Crypto Trends to Look Out for in 2021